Rugged handheld on expedition to the top of the world

Mount Everest expeditions are notoriously tough on people and their electronic gear.

The Nautiz X6 rugged handheld is designed for extreme temperatures and the abuse of a two-month expedition.

While other electronics failed or were destroyed, the Nautiz X6 rugged handheld thrived on Mt Everest enabling communication, entertainment, and photography.

Peter Urban and Eric Gran have been climbing mountains together for years. Regulars on the volcanoes in their home region of the Pacific Northwest in the United States, they’ve each also climbed other major mountains around the world. This year, they set their sights on the most famous mountain in the world, Mt. Everest. And they brought a new climbing partner with them, the Nautiz X6 rugged handheld.

In addition to mountaineering training and experience, gear selection is an important part of any major expedition. Because of the extreme altitude, Everest is a particularly long expedition, requiring two full months. Part of getting to the summit is allowing your body to slowly acclimate to the extreme altitude. You ascend slowly and then once you get to Camp 2 (21,000 ft) or Camp 3 (24,000 ft.), you go back down to rest and recover before making your summit attempt. 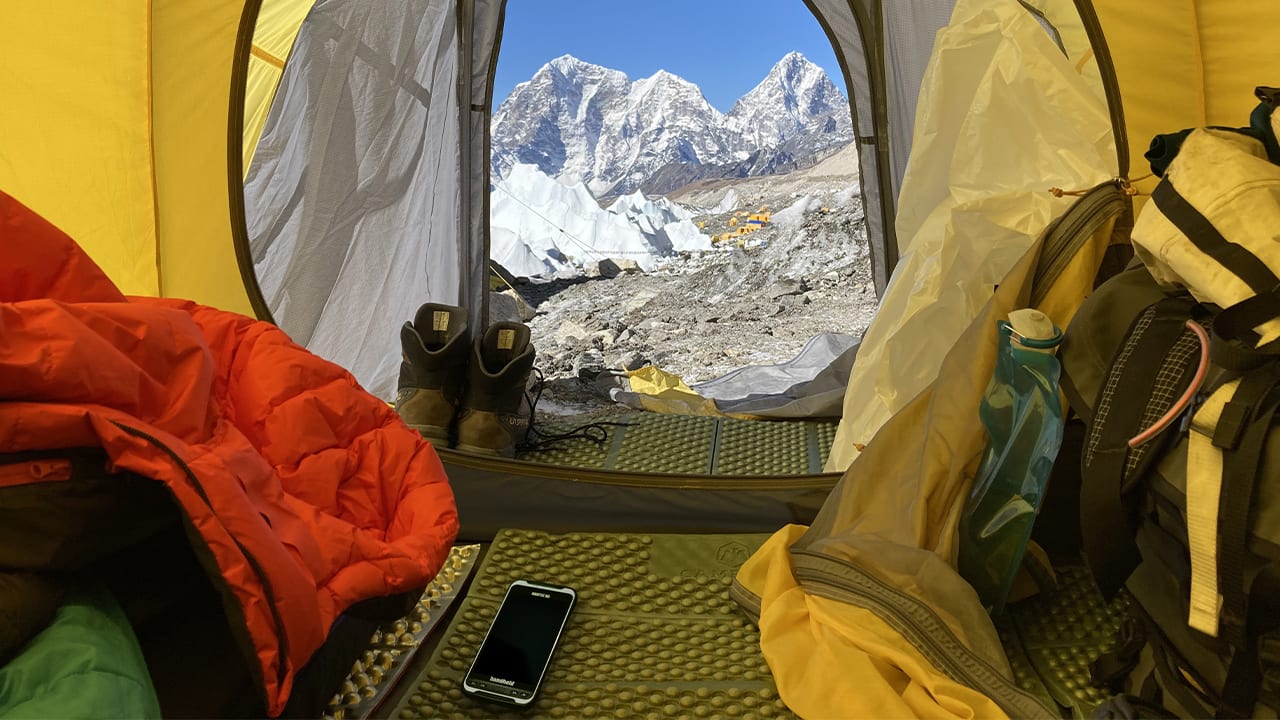 NAUTIZ X6 built for the extreme

While we usually imagine climbers roped up and moving ahead in their specialized gear, a major part of an Everest expedition is recovering in your tent. Peter’s wife, Amy Urban, is the director of marketing for Handheld US. “My wife suggested that I bring the Nautiz X6 loaded with movies and videos for down time in my tent. It has a bright, clear screen even if I’m outside. And it is tough enough to take the beating of a two-month expedition,” says Peter. “After long days climbing at high altitude, I was happy to be able to relax and watch movies while I recovered at night.”

After a 10-day trek to Everest Base Camp, and an additional week adjusting to the new altitude, the team set off on their 10-day acclimatization rotation to the higher camps. The extreme altitude, bitter cold, and tough environment are hard on the human body, but also on electronic devices. “At the high camps, all my electronics were destroyed, my cell phone smashed,” said Peter.

Upon returning to base camp, they had access to spotty Wi-Fi and limited cell coverage. Even people who brought the latest cellphones struggled with Nepali SIM cards. “Even though it was unlocked, I hadn’t been able to get my phone to work from base camp. And after I smashed it at the high camps, I took out the SIM card and was thrilled with the Nautiz X6 fired right up. I called my wife in the United States to tell her that not only had Handheld’s Nautiz X6 been great for watching movies in my tent, it now let me communicate from Everest Base Camp at 17,500 ft!”

Heading towards the Everest summit

Much of an Everest expedition is waiting for a weather window for conditions conducive to reaching the summit. It takes sophisticated meteorology as well as understanding the mountain. And since the summit attempt itself is a multi-day affair, it requires getting yourself into a position on the mountain to be able to make a “dash” to the summit when conditions are right. For most teams, that means getting to Camp 2 (21,000 feet) which is the most comfortable of the inhospitable Everest high camps.

“The Nautiz X6 had performed so well and was now my only communication device and camera, so I took it with me when we set off on our summit bid.” 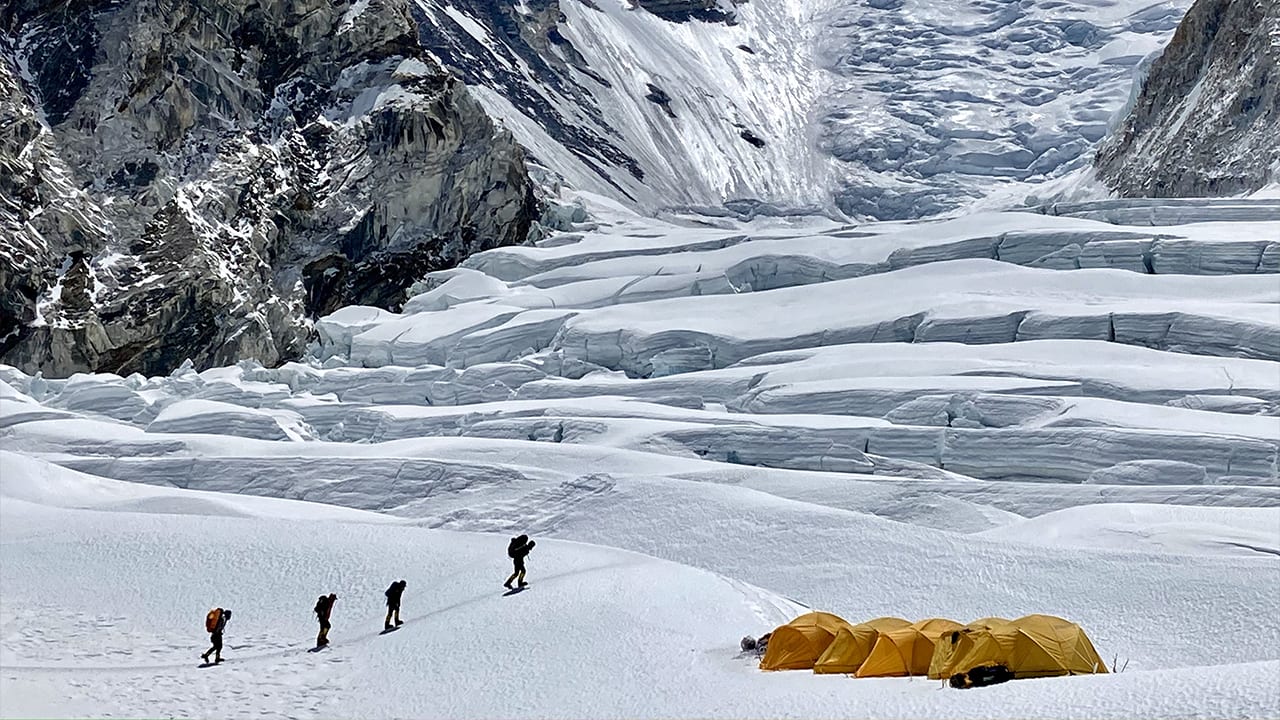 After waiting in snow and high wind at Camp 2, the team saw a potential weather window and decided to climb to Camp 3. They knew that current conditions were going to be rough but that they would be in better position to move on the summit when the weather cleared.

As they set off through the Western Cwm, winds were high with a lot of blowing snow. Movement at this altitude is tough under the best of conditions, but low visibility and high winds made it especially difficult. As they progressed and the weather worsened, they decided that it would be unsafe to continue, especially since the final section of the route to Camp 3 was the steep and treacherous Lhotse face. They decided to return to Camp 2 to wait for better weather.

As the weather deteriorated, Peter noticed that his heart was also not responding appropriately. While he had been fine up to Camp 3 on their acclimatization rotation, something wasn’t right this time. He checked his sports watch which tracked his heartrate and found that it was frighteningly—and surprisingly, given the great exertion—low.

The team was experienced at wilderness first aid and carried supplies that might be needed in remote emergencies. Upon arriving back at Camp 2, they did a more thorough assessment and determined that it would be unsafe for Peter to continue. They radioed for an emergency helicopter evacuation. 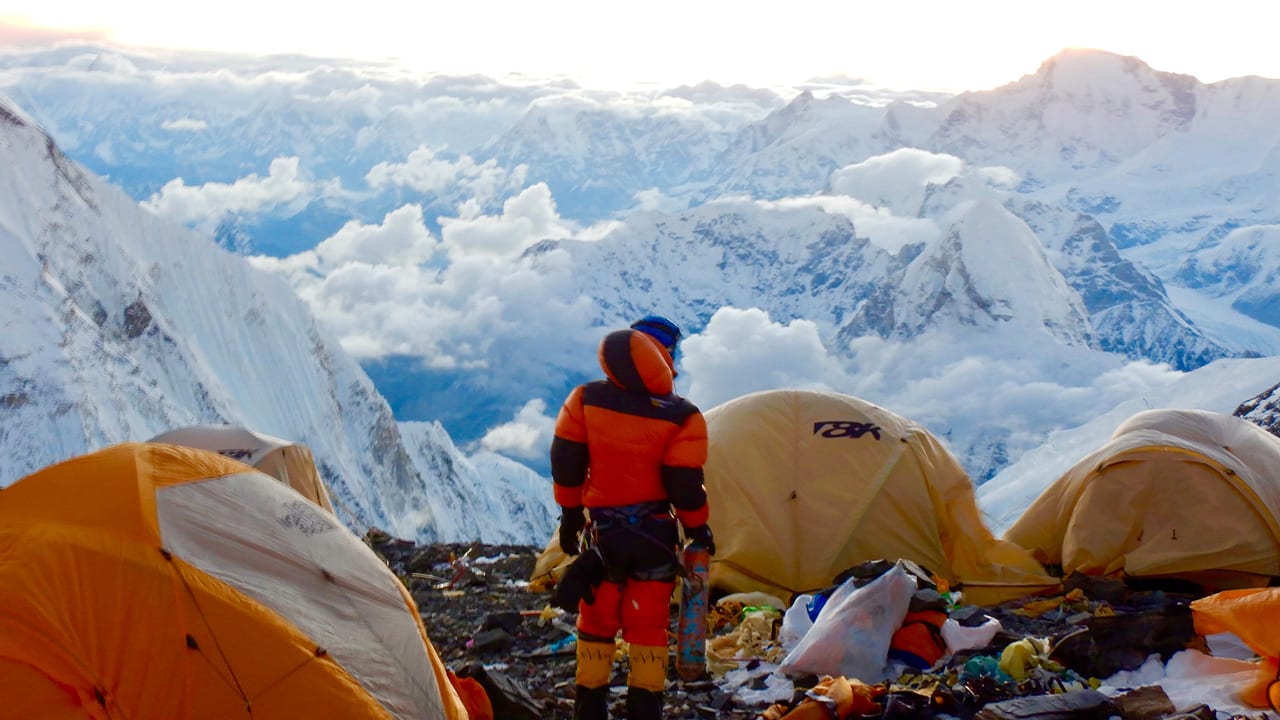 On Everest, Camp 2 at 21,000 ft. is the highest point where an emergency evacuation can happen, so abandoning the climb to Camp 3 that day was a fortunate decision which allowed Peter to be in a place where he could be evacuated.

Landing a helicopter at that altitude requires enormous skill as well as good weather. Generally, a pilot will fly alone with as much gear as possible removed from the chopper to make it as light as possible. Fortunately, the weather cleared the next morning allowing Peter to be safely evacuated and the rest of the team to move ahead to Camp 3 on their summit bid.

After a night on oxygen and with medication, Peter was feeling better and was able to use the Nautiz X6 rugged handheld to film the dramatic landscape of the Khumbu Icefall, Everest Base Camp and Kathmandu Valley on his helicopter trip to a Kathmandu hospital. With good care and at the lower altitude, he recovered quickly.

Eric and the team continued to navigate the weather which was especially chaotic because of a powerful cyclone from India directly impacting the mountain. Climbing safely to sleep at Camp 3 and then Camp 4, they found a very narrow window of suitable weather to summit Mt. Everest in the early morning of May 24. It was an expedition of a lifetime!