Perform surveys of coastal topography, sometimes in remote areas, as part of a university teaching program to measure the effects of winds, waves and nearshore currents.

Accurate profiles that provide insight into changing coastal environments, before and after tropical storms and over months and years.

The ALGIZ 8X field tablet is powerful enough for university oceanography research, and intuitive and rugged enough for student use.

Hurricanes that originate in the Atlantic Basin strike the East Coast of the U.S. just less than twice a year on average. The most destructive hurricanes leave permanent marks on coastal communities and sear their names into national memory: Katrina. Sandy. Ike. Ivan. But while the large-scale human and property loss of the worst storms are often well-publicized, the ongoing environmental impacts of frequent tropical storms, large and small, receive less attention — even though they have important implications for both human communities and wildlife populations.

Researchers at the University of North Carolina Wilmington’s Coastal Hazards Lab are doing the important environmental work of analyzing coastal change after storm events — most recently, Hurri-cane Isaias (2020), Hurricane Dorian (2019) and Hurricane Florence (2018) — as they teach and mentor UNCW students. The lab uses rugged mobile tablets from Handheld Group in research and teaching contexts to record data and make observations about how coastlines erode, rebuild and evolve. 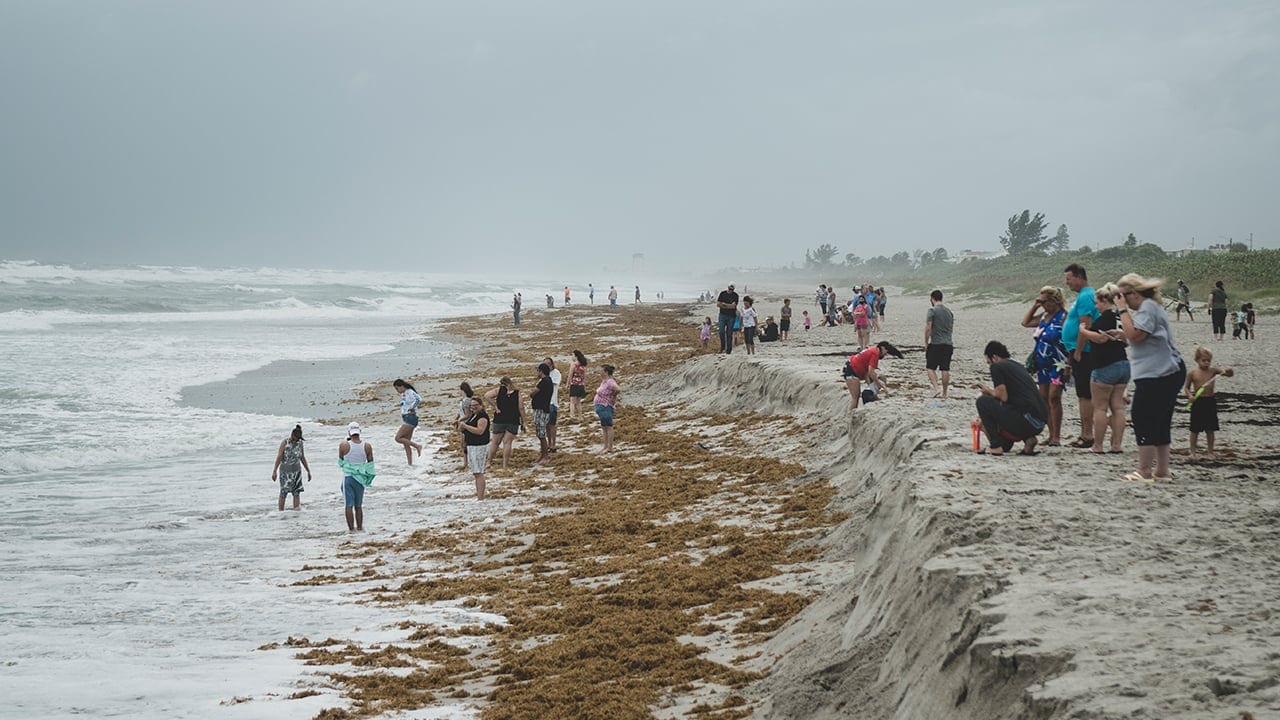 Teaching technology, outside the classroom

Dr. Joseph Long teaches undergraduate classes in oceanography and mentors graduate students as an Assistant Professor in the Department of Earth and Ocean Sciences at UNCW. Long headed up a Na-tional Science Foundation-funded research project focused on the impacts of Hurricane Florence on North Carolina’s coastal topography, and his research also includes studies of coastal change processes that happen during calmer wind and wave conditions.

UNCW places a strong emphasis on applied learning: giving students the opportunity to step outside the classroom, observe the natural processes they are learning about, and collect and analyze data in the field using state-of-the-art instruments.

Long is using the Algiz 8X rugged tablet computer from Handheld Group along with an external high-accuracy GNSS receiver to perform topographic surveys at Masonboro Island, an uninhabited barrier island near Wilmington that is part of the National Estuarine Research Reserve system. Masonboro Island is made up of habitats including beach, dune, grassland, shrub thicket, salt marsh and mud flats, and supports a variety of wildlife. Along with the usual suspects — foxes and raccoons, many native and migratory birds — it is home to populations of diamondback terrapins and loggerhead sea turtles, both threatened species. 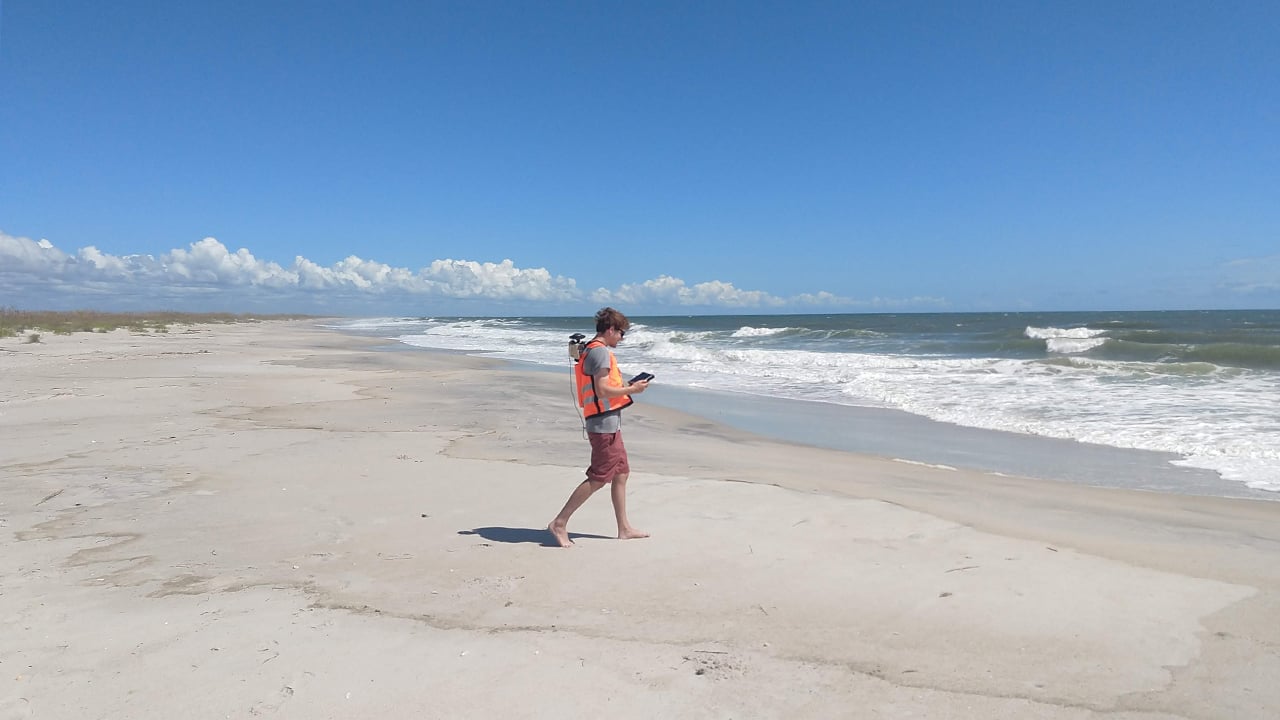 Many researchers study the island and its inhabitants, with projects ranging from turtle population surveys to water quality sampling to meteorological monitoring. The Coastal Hazards Lab has per-formed bi-monthly topographic surveys there since 2018 to measure how winds and wave energy cause sediment erosion and deposition on different parts of the island, and to assess the island’s abil-ity to naturally repair between major storms.

“We conduct topographic surveys of coastal areas and study how beaches, dunes and barrier islands evolve due to winds, waves and nearshore currents,” Long explains. “Repeat topographic surveys help us to better understand the impacts of storm events and the role that natural recovery has in the resil-iency of our nation’s coastline.”

Not just a walk along the beach

Taking research technology to the beach could be a recipe for disaster: “There is potential for the device to be exposed to saltwater, blowing sand or high temperatures,” Long says.

But the Algiz 8X is an ideal research and teaching assistant, built exactly for applications like Coastal Hazards Lab research. Its combination of speed, features and communication options make it well-suited to professional scientific data capture, while its intuitive design and ruggedness are perfect for new users and tough environments.

Even if the tablet gets covered in sand or immersed in water, users can wipe it off and keep working. The Algiz 8X is IP65-rated and tested by MIL-STD-810G U.S. military standards, offering protection against water, small particles of dust and dirt, varying temperatures and repeated drops. It’s compact enough to carry, weighing in at just over 2 pounds, and its 8-inch capacitive touchscreen still has plenty of space for viewing and manipulating maps, charts and other visuals. The tablet is also designed with features that support operation in bright sunlight and heavy rain, or while wearing gloves, and its field-swappable 5200 mAh battery enables totally uninterrupted data collection. 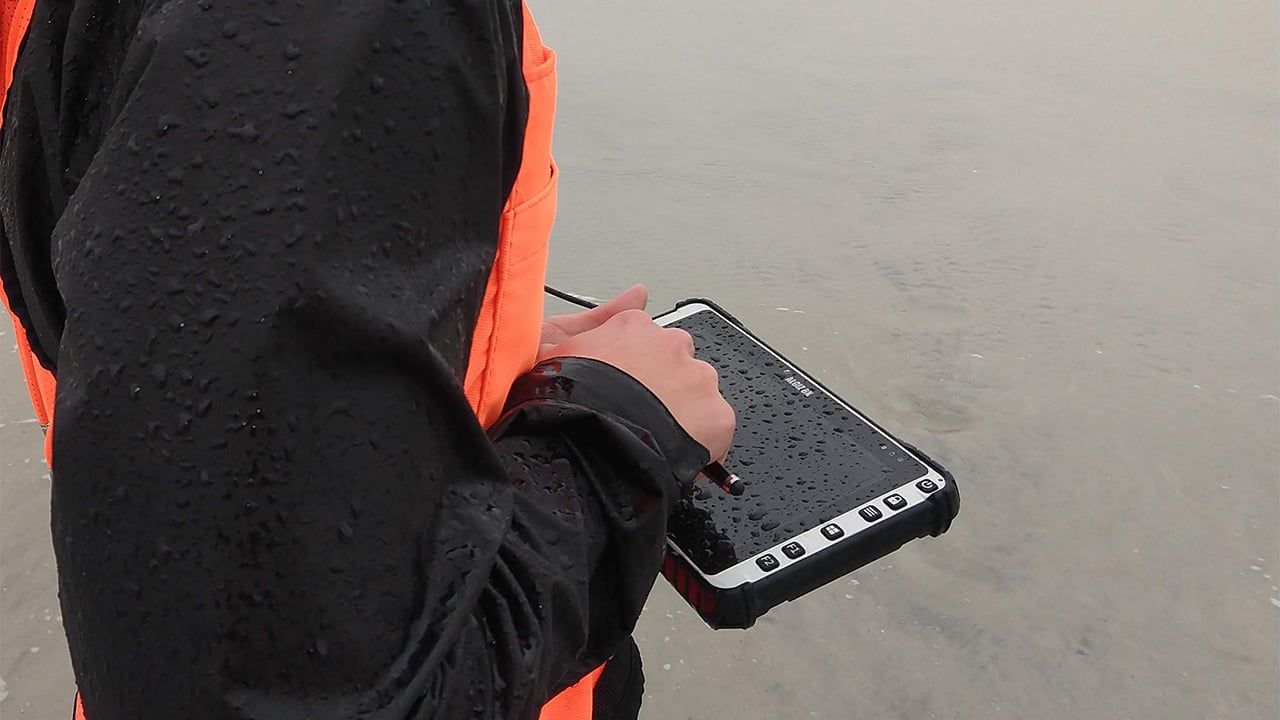 “The Algiz 8X tablet connects via BT to the high-accuracy Arrow Gold antenna and is either mounted on a survey pole to measure the elevation of individual points, or mounted on a backpack for walking surveys where we ‘mow the lawn’ up and down the beach to get a 3D map of the coastal area,” Long explains.

Long uses a few different software products to interface with the receiver, and says the Microsoft store and the Algiz 8X’s communication capabilities are an added benefit:

“I can load whatever software I need to program and deploy other types of sensors, such as water level loggers to measure how far and how long surge and waves inundate portions of the beach during storms. We can also retrieve and plot data and re-deploy sensors directly in the field, and without a bulky rugged laptop.”

The lab is using software such as ArcGIS Collector, a mobile data collection program from Esri; and VisualGPS, a freeware GPS data-viewing program; along with proprietary software specific to their data collection instruments. ArcGIS Collector software uses map-driven forms to let users with any level of experience capture field data including photos, videos and audio recordings, then syncs seamlessly with the cloud-based ArcGIS Online platform. 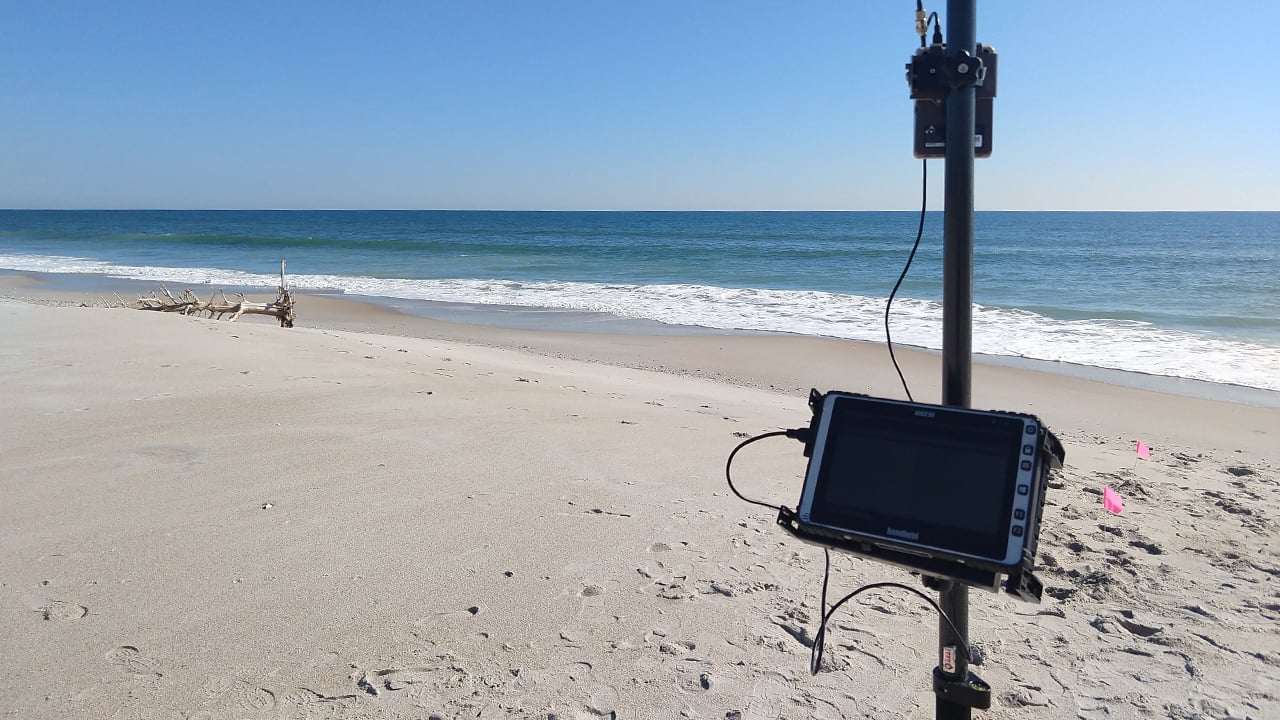 When cell service or WiFi is available, ArcGIS uploads data to the cloud in real time. When it isn’t, the Algiz 8X safely stores all the field data with its 128 gigabytes of local storage capacity, then Long and his colleagues sync the data later. VisualGPS data is always stored on the device and downloaded via USB back on campus.

Mixing and matching technologies can provide better customization than standard GPS surveying packages that bundle a data receiver, software and GPS antenna, Long says: “The combination of a bring-your-own-device GPS antenna and the rugged Handheld tablet was cost effective and allows us to use the survey collection software of our choosing.”

Suitable for both the most experienced professional researchers and students brand-new to survey-ing, the Algiz 8X rugged tablet is a reliable, powerful rugged computer that provides flexibility and value. At UNCW, rugged technology is empowering today’s researchers to add to the scientific body of knowledge surrounding coastal habitats — and equipping tomorrow’s visionaries with the data and tools they need to preserve and protect our evolving world.