Accurately determine how pre-identified veins of ore have shifted during the blasting operations needed to access them.

Precise post-blast location data, which translates to an accurate map of the ore’s new location – leading to decreased dilution and increased recovery.

The ultra-rugged Nautiz X8 handheld computer is helping geologists at mining sites all over the world survey to determine the exact location of valuable veins of ore, increasing efficiency and bolstering bottom lines.

Think of open-pit mining as a very large-scale game of hide-and-seek surveying: there’s ore in there, and you need to find it. Your success at the game is measured simply: the more ore – and the less waste – that ends up at the mill, the better your bottom line. You can define and grade-control existing ore veins. But what happens when that ore moves? Because when you blast the site to get to that precious material, it’s going to shift due to the forces of physics. This greatly multiplies the difficulty factor of efficiently finding the ore among the waste. You know where it was; now you need to know where it is.

Thanks to an ingenious combination of their customized hardware, proprietary software and super-rugged Nautiz X8 mobile computers from Handheld, Blast Movement Technologies (BMT) is helping customers around the globe reduce dilution and achieve a significantly higher yield percentage. And in the world of mining for valuable ores, a few percentage points can translate to hundreds of thousands of dollars.

BMT has more than a hundred mining customers, in 35 countries around the world, operating open-pit mines that produce a wide variety of ores. These mines have historically been faced with a daunting challenge: projecting how ore veins will shift during blasting operations. The often-narrow veins can shift considerably, and unpredictably, during blasts. And, of course, knowing where the veins are when it’s time to start the digging is the key to cost-efficiency.

Previously, various paper-based, software-based and even “gut-feel-based” systems tried to predict these shifts based on detonator location, rock composition, grade angle and other factors. Geologists with lots of mining experience could make an educated guess – but guessing isn’t the optimal level of confidence to have if technology can provide something better. And BMT has devised a far superior system, one that relies on rugged Handheld Nautiz X8 PDAs for control and communication: the Blast Movement Monitor® System. 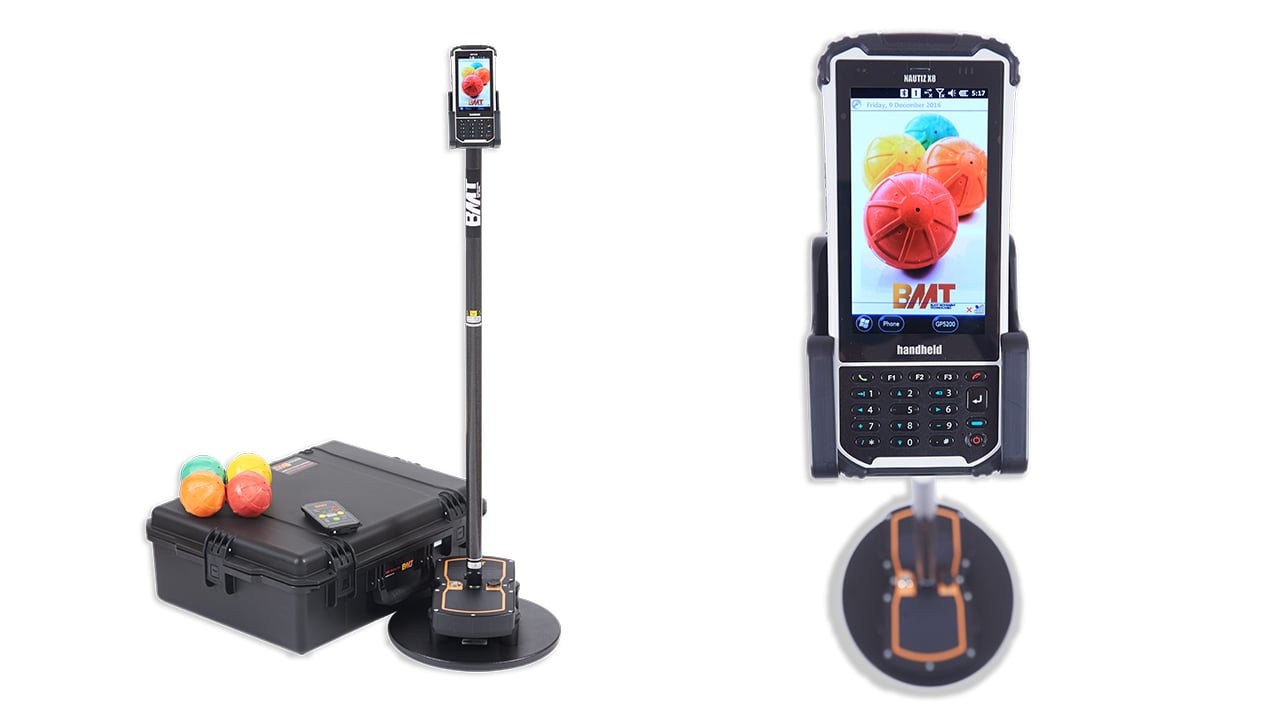 But… as BMT has refined and upgraded their system, its level of sophistication began to outpace the capabilities of the PDAs the company was using for the computing requirements of the system. “They were end-of-life, and also unable to run our latest software correctly,” says Jens Bergmann, Product Manager for BMT.

Paul Ward, BMT’s Manufacturing Manager, says, “The Nautiz X8 became our primary choice of PDA because it stood above all others with its ruggedized reliability and more than sufficient processing power. The three-year warranty support also covered our expected end-of-life requirements.”

Every blast releases energy in a predictable pattern. But the subsequent movement within the fragmented rock isn’t nearly as predictable. And that’s the crux of the problem the BMM System solves.

Here’s how it works: When preparing for a blast, geologists place specialized BMT-made directional transmitters (BMMs) within the blast area, dropping them into holes they’ve prepared. Once the blast is complete, the geologist walks the muckpile with the BMM Detector, a sophisticated instrument that detects BMM transmitter data and sends it to the Nautiz X8 via BT.

The handheld, which is housed in a passive holder mounted directly on the BMM Detector, displays a field of transmitter signals, showing the relative signal strength across the reconfigured landscape. Following the grid to where signal strength peaks, the geologist arrives at a spot directly above each BMM; this provides one axis of location. The relative strength of the signal correlates to the depth of the transmitter, providing the other axis – and thus a three-dimensional position.

The results can be startling. Suzie Talakowski, a mine geologist at the Nullagine Gold Operation in Western Australia, says, “Using the BMT solution has led to less ore loss, less dilution and an increase in head grade. Using BVIs (blast vector indicators) previously, we had a recovery rate of 41 percent from the bottom flitch; using BMMs, we’ve had a 94 percent recovery rate. For one particular blast, we quoted an increase in value of A$134,000 due to the use of BMMs.”

This highly efficient process wouldn’t be possible without the right tool for the job. The ultra-rugged Nautiz X8 has the right combination of communication, computing and display capabilities to make it indispensable in the field.

Data communication is versatile, with a choice of operating systems – Android or Windows Embedded Handheld (WEH) – that allows you to choose the most suitable platform for your needs.

Because mining is an all-weather, outdoor operation, the display is a critical factor in effective use. The Nautiz X8’s 4.7-inch high-brightness screen is one of the largest, most brilliant capacitive touchscreens in its class, and it recognizes light-touch and multi-finger gestures just like a personal smart device. And the 5200 mAh Li-ion battery lasts up to 12 hours on a single charge.

Ready for anything, in any conditions

But perhaps the most necessary attribute for a handheld in a mining environment is true ruggedness. Mines are notoriously hard on mobile technology, and BMT’s customers operate mines ranging from the sweltering temperatures of Western Australia and Africa to the frigid zones of Russia and Scandinavia. Add to that the inherent dustiness of an open-pit mine, and you’ve got conditions that separate the rugged from the rest.

The Nautiz X8’s ruggedness is unparalleled. It carries an IP67 rating and meets stringent MIL-STD-810G U.S. military standards, which means it’s impervious to both dust and water and can survive repeated drops, strong vibrations and operating temperatures ranging from -30 C to 60 C (-22 F to 140 F).

The path of innovation ahead

Mining has been around for thousands of years; citizens of ancient Egypt, Rome and Greece all engaged in mining activities. And while mining strategies and techniques have made leaps in improvement over time, the technology age has provided the largest-scale innovations. Powerful combinations like BMT hardware and software paired with the ultra-rugged Handheld Nautiz X8 are taking mining efficiency to levels previously not possible. And that level of efficiency translates directly to project success.

Suzie Talakowski sums it up simply: “This technology is the way into the future.”