After a massive tornado wiped out much of the city of Joplin, Missouri, Asbell Excavating needed to find all of the downed transformers, note their location, then go back and clean up the spills before serious environmental damage could occur.

GPS points were imported first into an Excel spreadsheet then into Carlson Takeoff, put it on the Supervisor GPS tablet and the Asbell crews set off to take care of the spills.

The Carlson Supervisor rugged tablet pc, with integrated GPS, allowed Asbell to go back and locate the spills and meet the EPA standards.

After a massive tornado, crews used rugged Algiz tablets for data collection on the downed transformers, noting their location so they could clean up the spills before serious environmental damage could occur.

On May 22, 2011, an EF-5 tornado touched ground in Joplin, a southwestern Missouri town most noted for its location on the famous American highway, Route 66. Within minutes 30 to 40 percent of the town was destroyed, and 162 people were killed in what severe weather expert Greg Forbes from The Weather Channel called the third most devastating tornado in U.S. history.

At disaster sites like the one in Joplin, groups of first responders arrive, sometimes in minutes. Some are there to begin the search for the injured. Others are the professionals who assess and limit damage to the environment from downed or broken equipment. Brad Ezell, an employee of Asbell Excavating and nearby resident, was tasked with examining around 2,000 electric power transformers and containing any oil leaks following the tornado. With the Carlson Supervisor (a U.S. private-labeled version of the Handheld Algiz 7 rugged tablet pc), Ezell and his team had a rugged assistant to help them cover the tremendous volume of trouble sites and efficiently document the cleanup process. 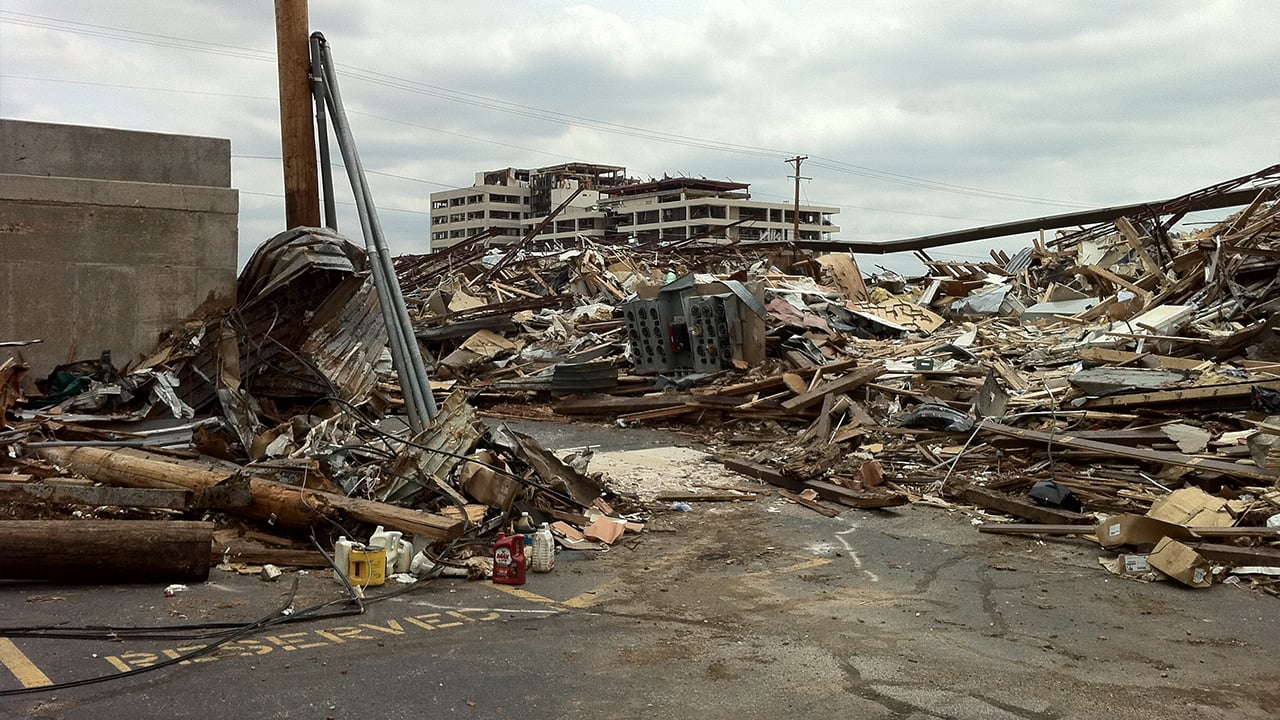 The Algiz 7 rugged tablet pc runs the Windows 7 operating system and comes with BT, Wi-Fi and 3G cellular connectivity, and its 7-inch touchscreen is readable even in direct sunlight. Weighing in at just 2.42 lbs, its features include a built-in 2-megapixel camera and hot-swappable batteries to deliver power throughout the day.

Shelter from the storm

The day of the tornado, Ezell was helping trim trees at his grandfather’s home in Oronogo, about nine miles from Joplin, but he could clearly see that a storm was building.

“I’m a pilot,” Ezell says, “so I’m very observant of the weather. At least every two years, there’s a tornado within a 20-mile range of Joplin, so I know what the sky looks like when one might be coming.

Ezell felt, however, that this storm was different. That it was going to be big. The clouds growing about 40 miles east over Parsons, Kansas, were consolidating into a tower and staying put. He looked at local radar and saw a section of the storm build to the west, which was an uncommon occurrence. Thankfully, it seemed that it was not moving toward Oronogo and his grandfather, but it did appear that it was taking a path toward his own home in Carl Junction, about nine miles from Joplin.

“I told my grandfather to stay put, and I decided to take off after it, even though I should have just stayed where it was safe,” Ezell recalls.

He was lucky on two counts: He never caught up to the storm, and it missed his home to the south. But Ezell did enter Joplin right after the tornado passed through. What he saw was unimaginable and surreal.

The tornado cut a wide swath of destruction through this town of nearly 50,000 residents — touching down at one end of Joplin’s city limits and exiting the other. By the time the tornado approached St. John’s Hospital it was at maximum strength. The Home Depot was leveled. The Wal-Mart, gone. Churches, schools, fire stations, apartment buildings and innumerable homes were damaged or destroyed.

GPS tablet and Carlson to the rescue

After the storm, some of the city’s 2,000 damaged electric power transformers were leaking oil. The local electrical utility contacted Asbell Excavating because it had performed this kind of cleanup three years earlier when nearby Pitcher, Oklahoma, was hit by an F-4 tornado.

“They needed us to find all of the downed transformers, note their location, then go back and clean up the spills,” Ezell relates. “We certainly had a lot of work on our plate.”

With the downed transformers spread out across the city, Ezell didn’t know how he and other Asbell employees would be able to first identify the leaks and then return to clean them up before serious environmental damage could occur.

Ezell turned to Brad Bryant at Laser Specialists with a request for an affordable, portable GPS data collection system, and Bryant in turn put him in touch with Aaron Newman of Carlson Software. Newman informed him of the Carlson Supervisor rugged tablet and that its on-board GPS could satisfy his data collection needs. 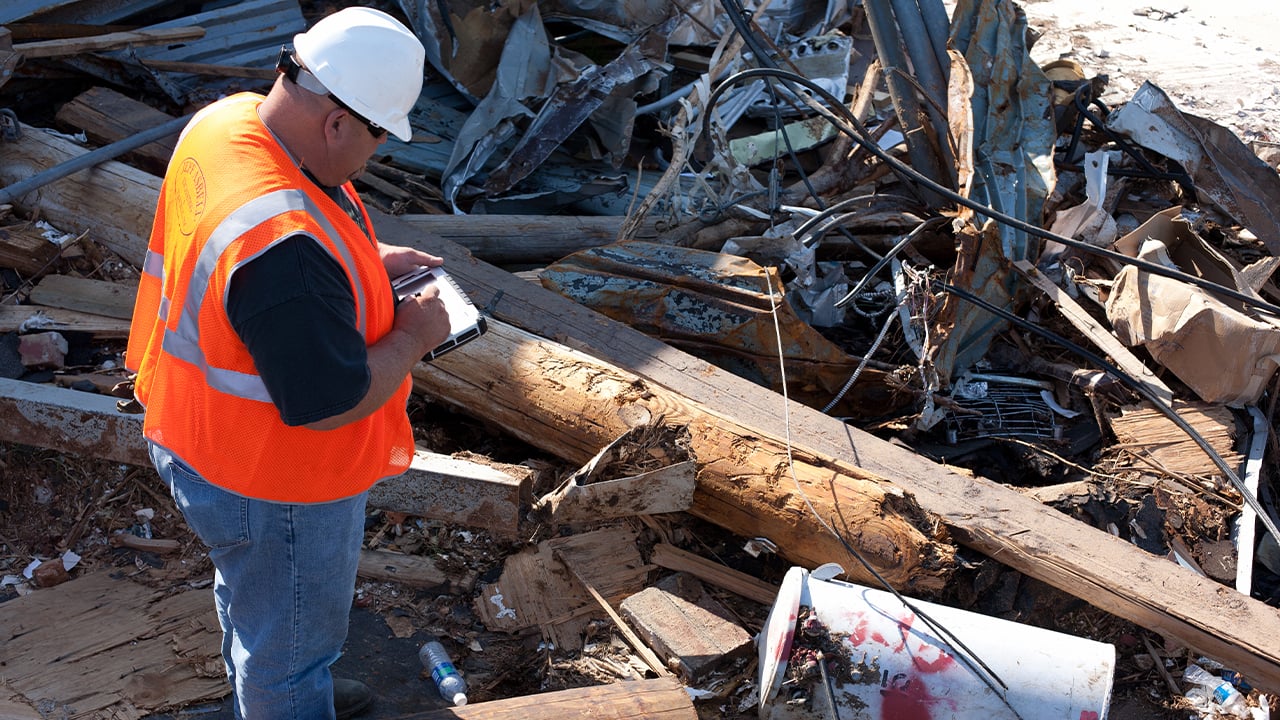 Asbell sent out several crews with inexpensive handheld GPS units to identify spill locations. The GPS points were imported first into an Excel spreadsheet then into Carlson Takeoff, estimating and modeling software already in use at Asbell. Ezell then converted the Takeoff file into a CRD file, put it on the Supervisor rugged tablet and the Asbell crews set off to take care of the spills.

“The Carlson Supervisor rugged tablet pc was perfect,” says Ezell. “It gave us the ability, with integrated GPS, to go back and locate the spills. We could just throw it in the truck and easily bring it along with us as we went from spill to spill. Some spills had a lot to clean up and others hardly any at all, but it was our job to meet the EPA standards. We took all that we removed to a certified landfill and dug down and did grid samples to make sure the oil was cleaned up.”

The Supervisor rugged tablet also came in handy when Asbell received a contract with the Army Corps of Engineers to do a plan for a vegetative debris grind site — a place to dispose of downed trees and other vegetation.

Ezell again used Carlson Takeoff to lay out the site plan, then used the Supervisor rugged tablet pc on-site to execute it.

“I’m happy to say that Joplin is on its way back,” Ezell concludes. “While there are really a lot of empty foundations, for the most part the destruction from the tornado has been cleaned up, and now we’re starting to rebuild. All of us at Asbell Excavating were glad that we had the right tools to do our part.”