Tunneling crews with no prior surveying experience can perform surveying work using a simple tablet interface.

With help from the Algiz XRW portable rugged notebook computer from Handheld Group, two scientists hosted the Arctic Science Field Logistics project from autumn to spring 2013-14, providing researchers from around the world a unique opportunity to collect scientific data in a remote Arctic location. This rugged notebook assisted with recording and storing scientific data, keeping open lines of communication with stakeholders across the world, navigating around icebergs, tracking location data and anticipating stormy weather.

In the summer of 2013, French researcher and explorer Alan Le Tressoler and Norwegian marine biologist Elin Austerheim prepared to journey to Greenland from Brest, France to spend nearly a year frozen in ice off the east coast of Greenland in the Argelvor: a 43-foot steel sailboat equipped with an onboard laboratory.

“It never ceases to amaze me how much preparation is needed to get ready for this type of expedition,” Le Tressoler says. “You have to be able to do repairs if something breaks or malfunctions — and it’s not like we could take a quick trip to the store after the ice froze.”

Perhaps the most important preparation the crew made was to ensure they were using reliable, powerful technology to keep open lines of communication with the outside world. So the scientists turned to what they knew worked: the Algiz XRW. This portable computer had accompanied Le Tressoler on a 2012 expedition to the geographic North Pole with excellent results, and he was eager to use it again in Greenland.

“The Algiz XRW is the only electronic device on board I trust. Many other devices couldn’t survive in these conditions,” Le Tressoler says. “It had a rough life up here, but it held up with no problem.”

Austerheim agrees: “Most equipment that runs on batteries doesn’t cope well in low temperatures, but we could rely on this rugged computer to be functional.” 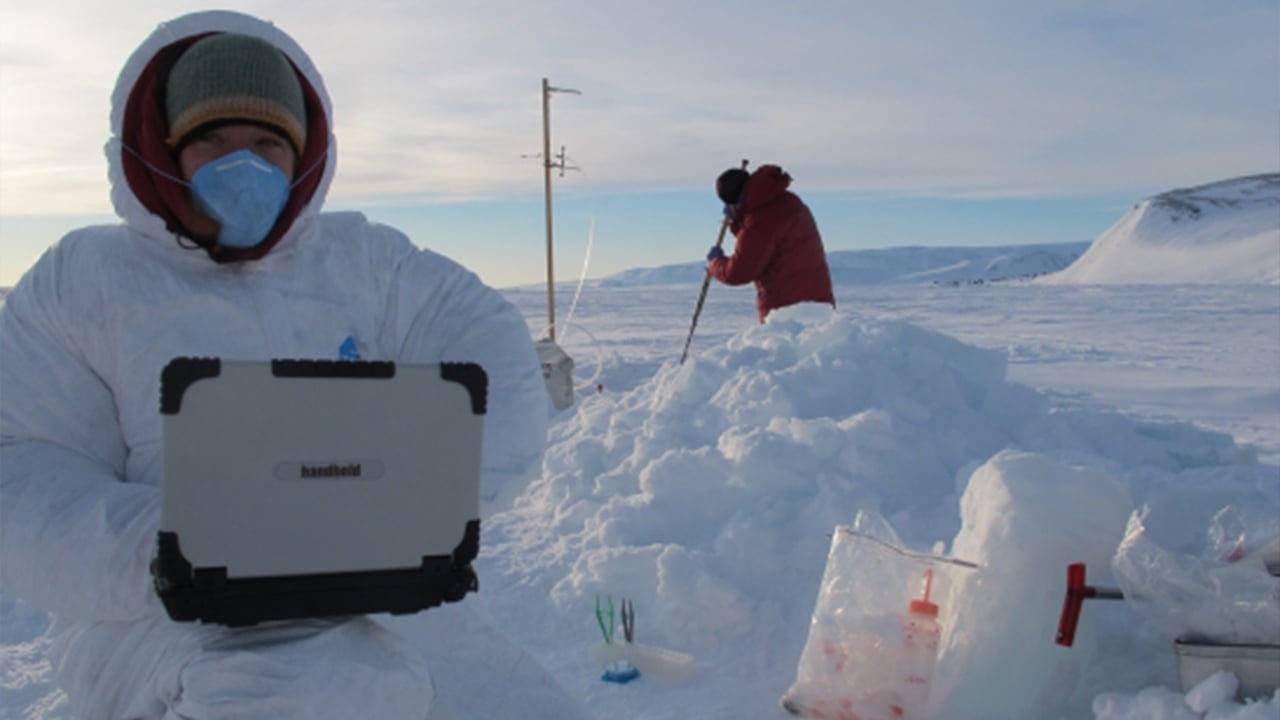 The Algiz XRW is IP65-rated, which means it’s completely dustproof and waterproof, and it passes stringent MIL-STD-810G standards for surviving extreme temperatures, humidity, drops and vibrations. Despite its strength, this rugged notebook is compact enough to carry around, weighing just 1.6 kilograms (3.5 pounds). Two USB ports and an RS232 port allowed the scientists to connect a satellite phone and a range of scientific instruments for collecting data in the field.

Using the Algiz XRW in combination with their satellite phone, Austerheim and Le Tressoler could download and view maps and sea-ice charts, receive weather forecasts and anticipate upcoming winter storms, communicate with scientists across the world about ongoing projects, send and receive email, update their blog and website, and make phone calls.

A scientific base in Greenland

The Algiz XRW proved to be an invaluable navigation tool during the journey to Greenland. Its integrated GPS and electronic chart-plotting capabilities helped guide the way, and its ruggedness and portability made it a convenient and reliable device to have on board.

“Since the XRW is waterproof, we could keep it up on the deck with us,” Le Tressoler says.

The researchers arrived at Amdrup Havn, a small bay, in mid-September. By the time the sea ice solidified in late autumn, the scientific base on the Argelvor was ready to host visiting scientists with a small lab that included a microscope, vacuum pumps for water filtration, and storage for samples. It also provided field equipment such as a pulka sled, a camp stove, tents and sleeping bags that would allow up to six people to live aboard the boat.

Each week for several months, Austerheim and Le Tressoler collected, filtered and preserved samples of snow and ice for the Ampére Laboratory’s Environmental Microbial Genomics group and the Laboratory of Glaciology and Environmental Geophysics. Visiting scientists from these institutions then used the specimens to study the transfer of microorganisms among the atmosphere, snow and ice, providing insights into their role in the ecosystem’s nutrient and contaminant cycling.

On behalf of the International Research Institute of Stavanger, the Argelvor crew also conducted a controlled experiment that mimicked an oil spill, then analyzed micro-communities to see how they reacted to oil exposure over time.

Sampling instruments hooked up to the Algiz XRW assisted the scientists in their collection and analysis. The primary instrument they used was a device known as a CTD that measures conductivity, temperature and density, allowing scientists to analyze physical conditions such as temperature and salinity throughout a water column.

Ornithologists used the project’s equipment to study the feeding behavior of Arctic seabirds called little auks. They attached a lightweight temperature and depth logger to the birds’ legs, and after three days retrieved the loggers. Connecting them directly to the Algiz XRW, they learned how long the little auks flew and how deep they swam to find food.

The Arctic Science Field Logistics project, with the help of rugged mobile technology, provided a way for scientists across the world to work together side by side in one of the world’s most remote, most challenging and least studied environments.

It was collaboration, communication and connection at its best — all made possible with rugged mobile technology.